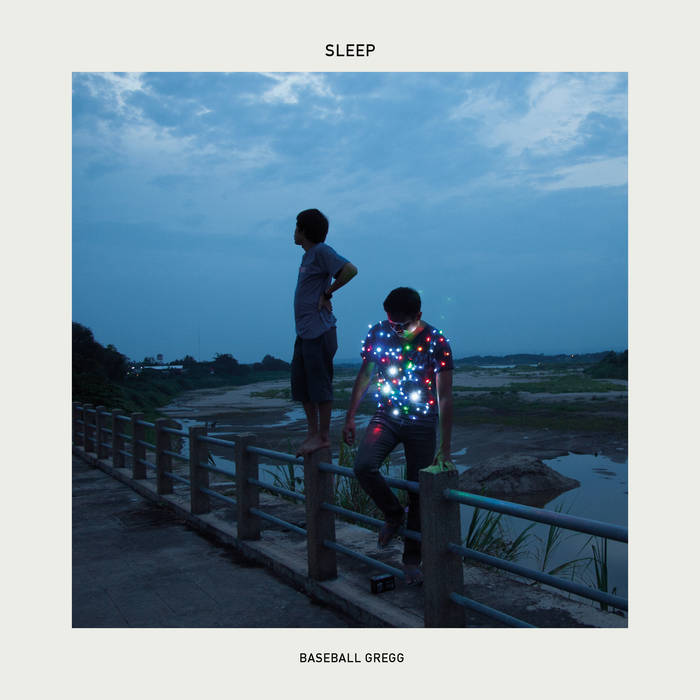 Evan Greenwald Baseball Gregg is maybe my favorite band and this is my favorite thing they've done yet. Best album of the year 2018. Favorite track: Gemini.

A middle aged man leaves a house alone in the nighttime. Pensive and uneasy, he walks to a port, sits on a rock near the water to watch the sunrise. He is searching for something: is it love? His past youth? Sunlight? Slowly he drifts to sleep listening to the sound of water lapping against the rocks. So starts Sleep, Baseball Gregg’s sophomore album which recounts a journey from the dusk until dawn, ending with the final song Sunrise: “It’s so late that it’s morning, I hope you don’t mind”.

With an unprecedented patient atmosphere, crafted by the duo in the in their usual calm and lazy manner, Sleep touches on themes of remorse, regrets, nostalgia, and the desire to find someone with which you can ride out the waves created by the storm of life. It is from this same storm that we escape each night into our dreams, where we are free to give form to our subconscious: "Everybody’s gone, now we’re all alone” (All Alone). After neon lit car trips through bright city-scapes, flashbacks to fantasy lives never lived and abrupt plunges into memories of the past, the man is woken up by the first rays of the sun - an epiphany. The sunrise of a new day, the courage to embrace the unknown and to be whoever it is you would like to be: “Don’t hide from yourself” (Infinite Scrolling).

Sleep is a concept album that gracefully touches on delicate and universal themes: unhappiness and peer pressure (Yo Tengo), queerness, fear, and dysphoria (Infinite Scrolling), acceptance (Welcome the Night), hesitations about the future (Always Feel the Same/Sunset), Love (Gemini), infidelity (Together in my Dreams), heartbreak (All Alone), anxiety (Subtropical Solitude), depression (Sleep), and salvation (Sunrise).

A troubled meditation on the night, lit by the full moon and glowing milky way (“Could you still stare at me glowing in the dark?” - Gemini), Sleep is the antithesis of the sunlit and carefree afternoon of the duo’s first album Vacation, a debut which was lauded by Noisey, Impose, Rolling Stone and Indie Shuffle, helped the group play impressive shows in Italy and around California, and accumulated hundreds of thousands of Spotify plays and a significant amount of airtime on US college radio.

In the thirteen songs that make up Sleep, Baseball Gregg has finally fully embraced their musical identity and have given life to a mature and totalizing world of music. Sleep was crafted over the course of two long years between California and Italy, and recorded by the duo together in Bolognina in the scorching summer of 2017.

The cover photo was taken by the Thai director and 2010 winner of the Cannes Palme d’Or, Apichatpong Weerasethakul, and is part of his series “Power boy” (from Tomorrow for Tonight, Dublin 2011). The artwork flawlessly communicates the empty space, melancholy, and atemporal twilight of Sleep: “Neon lights are shining and my sense of time is slowly fading out.” (Gemini)

Written, played, recorded and mixed by Luca Lovisetto and Samuel Charles Regan in their respective bedrooms in Stockton, California and Bologna, Italy between April 2016 and March 2018.

Mastered by Dylan Wall at Tastefully Loud Studios in Seattle, Washington. Guitar solo on “Yo Tengo” performed by Eli Wengrin; vocal harmonies for “Welcome the Night” written and performed by John Steiner; additional production on Always Feel the Same by Wesley Allard and Logan Wells.

Cover photo by Apichatpong Weereasethakul from the Power Boy series (from Tomorrow for Tonight, Dublin 2011).

Track Name: Shine So Bright
Once in a while
Sun hits your face
Shine so bright
Track Name: Yo Tengo
Llorando junto a ti
La espuma de los días Yo tengo que ser feliz
Y no mires el sol
Sabes que no tienes
por qué fingir conmigo No te preocupes, hombre Los 35 años son mejores de lo que esperábamos Pero sabés qué?
No soy muy feliz
Track Name: Infinite Scrolling
You fear the unknown?
Well, that's a lie
And a fairy tale
You fear the unknown?
Well, that's a lie
You tell yourself
Don't speak your mind Live your life
Behind closed eyes Cause pretty soon
Gonna die
It's not like it's my life
Don't hide from yourself
You fear the unknown?
Well, that's a lie
And a fairy tale
Deep down you know well
All you fear's yourself
Don't be afraid of the past
It's all behind you
Go live your life
As you like
It's only what's right
Don't hide from yourself
Track Name: Welcome the Night
When we were young
In the bunk above
You slept every night
In the darkness
To watch over me
Now that we have grown
When I'm all alone
You're in this new darkness
And still are so comforting
Our day
Our day is done
Though we did laugh and
Play in the sun
Boy did we have some fun
But now it's only right to
Welcome the night
These years have passed
How they went so fast
We saw colors so bright that
We'll never get out of our minds
Now the future calls
Sure we'll have a ball
There'll be colors more subtle
And more difficult to define
Our day, our day is done
Though we did laugh and
Play in the sun
Boy did we have some fun
But now it's only right to
Welcome the night
Track Name: Always Feel the Same
Don't want to play no games
I know we'll always feel the same
We'll always feel the same
You've got it when you say
"I know we'll always feel the same"
Track Name: Sunset
You're like the sun
Your warmth fills my life
Don't set, please don't set on m
Track Name: Gemini
I'll never meet a muse
Should I accuse my tasteless soul
Is there any chance I'm dreaming
Or this endless night
May be ending by itself
It's all grief
I feel like a creep
Lifecast all my nights
My soul aches all the time
It's a shame I'm still alive
What if I could spend
Some time alone with you
Could you still stare at me
Glowing in the dark
Standing still?
Breathing is not easy
If your lungs are collapsed
Neon lights are shining
And my sense of time
Is slowly fading out
I love being with you while we lay
On the afternoon
When otherwise I'd be
Scrolling my feed alone
Scroll and fave with you
Well it's so much easier
I wonder how life'd be like
If we never got to see again
We're on the road again
It doesn't matter if we all die
At the time I wrote “Sad Sandra”
I was blind and you did not exist
I know you know I don't know
We did learn how to stop
The more I hug you
The less I can see
Beyond my fantasy
Track Name: Together in my Dreams
Look at me, my heart bleeds
Cause your wife's in the room
And she can't see
You and me, so you scheme and I dream
Smiling eyes and whispering
Sound of your voice
So smooth and sweet
I can't wait to fall asleep
So I can see you in my dreams
You have your wife and family
You love each other
Comfortably
Though our love
Will never be
We'll stay together In my dreams
All night long I hold you
In my arms When I wake It's still you
I want to see
Next to me, next to me
Track Name: All Alone
It's getting late
Make our escape
Just us in the night
Take off, let's take flight
I can't stop thinking bout you
Everybody's gone
Now we're all alone
All Alone
Say it's too late
Make my escape
Alone in the night
Leaving you behind
I can't stop thinking bout you
Kick me out the door
Now I'm all alone
Track Name: Subtropical Solitude
I wish that Tonga
Was a tropical disease
Lost in this paradise
Looking for some trees
I eye three palms down there
I need some relax
The water's cold and dark
The ocean's very deep
I can feel this moon
Very close to me
I water myself weekly
With products of the sea
These shiny shells
Looking for suntan
I love being alone
Track Name: Sleep
Wash over me
Let me sleep
You know I want it all
But I'm too afraid I might fall
Don't leave me alone
Cause I might just end it all
Midnight memories
They sparkle and they breath
While winds push me towards
Where there's something for me
And late night all alone
I’ll stare out at the sea
While waves of regret
Slowly rock me to sleep
Track Name: Sunrise
Driving home in the sunrise
Wait for me, wait for me
It's so late
That it's morning

Featuring Oakland sounds from the Smart Bomb collective and Samplelov.